You are here: Home / From the Frontline / Taliban offensive all over Afghanistan

Last week marked the 15th year of the end of Taliban regime and the beginning of costly NATO’s Operation Enduring Freedom in Afghanistan, but in the latest weeks Taliban offensive has been raging in several provinces in an attempt to take control all over the country.

In many provinces, only the very city center of the capital cities are back to government rule, while villages and surrounding areas still have a strong Taliban presence. Among the others, almost all districts of Logar Province, only 30km from Kabul, are under Taliban rule and only the central districts are ruled by the national government. A resident of Logar Province’s Charkh District told Afghan Dispatch that Taliban militants control all the districts and agreed with the government that if the police stay in their bases and headquarters there won’t be any clashes. Taliban have their own governor, civilian and military commissions. He also claimed that schools are open for girls and areas are safe from street crime.

However, at the same time, in much of the country civilians are fleeing their homes due to clashes between Taliban insurgents and national forces, many terrified at the thought of a comeback of the Taliban regime, others tired of their life being threatened by Apaches, drones and shelling on a daily basis. 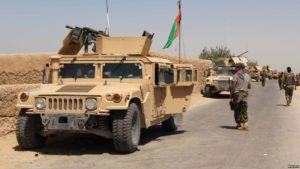 Under the attack of Taliban militias for weeks, the capital of Helmand Province, Lashkar Gah, alternates some days under insurgents’ control and days with government predominance. While the surrounding villages are predominantly still on Taliban’s hands, the capital city seems to have been cleared for the most part even after insurgents carried out heavy group attacks in the western district of Bolan and briefly taking control of the area.

Government officials say Taliban militants during a raid on a third area of Lashkar Gah, have suffered major losses. The governor of Helmand added that in the last days Afghan security forces killed 85 Taliban insurgents.

Hayatullah Hayat, Provincial Governor of Helmand, told Radio Azadi that the small arms bullets such as kalashnikov used by Taliban don’t reach Lashkar Gah city because too far, therefore insurgents are firing rockets on the city.

Now the only non-human method Taliban militants will employ is the placement of mines/IEDs and the occupation of people’s homes.

According to Hayat, a local police commander and six soldiers were killed in a suicide attack in Helmand and 12 others were wounded. Always in Helmand Province, a couple of days ago insurgents kidnapped many police officers and made a video of it. There hasn’t been any news about the group of kidnapped officers since. 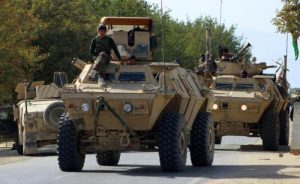 One of the most heavily hit provinces, Kunduz counts a huge number of war-displaced families. According to the United Nations Office for the Coordination of Humanitarian Affairs, 24,000 are currently the internally displaced civilians who fled Kunduz and sought shelter in closer cities such as Takhar, Kabul and Mazar-e Sharif.

At present, after some 11 day of clashes between Taliban and government forces, the army pushed back the insurgents from of the city center. Clearance operations are ongoing as the surrounding villages and other parts of the province are still under Taliban control.

Kunduz residents are now asking the national government to pay for the damages caused by the clashes between insurgents and government forces on both private houses and shops since the beginning of the latest Taliban offensive.

According to the Governor of Farah Province, the situation is improving in the provincial center and operations to clear the areas from the insurgents continue. He also confirmed that Resolute Support Mission (with the help of U.S. and Italian forces) are there to provide air support and assistance. He added that the Taliban fighting in Farah came from Helmand and Nimroz and included Pakistani Panjabis whoas people heard them speak a different language. Insurgents have suffered heavy casualties.

According to locals, Taliban are still in around Farah Provice and can attack anytime. Meanwhile, in the last twelve days 5,000 families moved to farther areas of Farah City and suburbs of nearby provinces Herat and Nimruz. Younis Rasooli, spokesman of the local governor, said the central government is planning to send assistance to these newly displaced civilians in the next days. Official statistics from the local governor claim the displaced families are 850, but locals disagree as they claim officials can hardly register every family who leaves their home.

A local resident of Herat City told Afghan Dispatch that in the last few days hundreds of families from Farah Province fled to Herat asking for help.

To add to the chaos, this morning, October 15th, fighting between Taliban and government forces intensified again in three areas of Farah City, Kangahan, Raj, Nowbahar.

Oruzgan Province, too, has been under Taliban attack. After the central government built new police posts in the villages surrounding the capital city, insurgents launched their offensive and a month ago they attacked Trinkut, the center of Oruzgan Province.

The central government sent General Abdul Raziq, police chief of Kandahar Province, to lead the security forces against the insurgents, but once his operation ended and the area was cleared, he returned to his post in Kandahar and Taliban launched yet another assault taking control of the districts surrounding the center of the province.

According to official reports 48 insurgents and 22 insurgents were killed during the clashes, 5,000 families are currently displaced, 2,000 in Kandahar and the remaining in the districts of the same Oruzgan Province, controlled by the Taliban.