You are here: Home / From the Frontline / New surge of sectarian violence in Afghanistan

Recent reports reveal there is a new surge of sectarian violence in Afghanistan where Shiite Imams and influential elders have been under attack and killed. It started last year with the murder of Azizullah Najafi, a Shia member of Herat provincial council, followed with the killing of Shia scholar Sayed Younis, and a few months later Abdul Wahid Saberi, a Shiite Imam. Last January 2nd a bomb in Herat’s Shia mosque killed five people and left many wounded. As yet no one has claimed responsibility for the attacks. 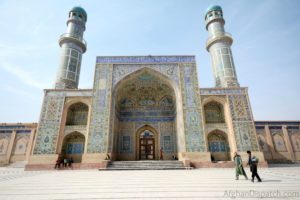 Except during Taliban regime, when multiple massacres against the Shiite Hazara community were carried out, over the last years the two largest religious groups, Sunni and Shia, have been living side by side in peace. The only country in the region that despite the fertile environment for extremism, has never been the theater of a full religious war and sectarian violence in Afghanistan wasn’t a worrisome issue. Until now.

Throughout history, being Shias the minority in Afghanistan, they haven’t been given their full civil rights. As a matter of fact, they’ve had little to no saying in government decisions, even though Shiite figures have always played a peaceful and constructive role in the Afghan history.

Politic analysts believe foreign powers are trying to achieve their goals by any means, also repeatedly trying to plunge the country into a religious war to be ignited through cases of sectarian violence in Afghanistan.

In the last months, there have been many attacks against Shia religious places and gatherings in various areas to start the flames of a conflict between Shiites and Sunnis although the Afghans didn’t respond to the provocation. Some of the worst attacks have been during the Enlightenment Movement peaceful protest last July in Kabul, heinous murder of seven Hazara hostages in Zabul province, last October suicide attack during Ashura in Kabul’s Sakhi Shrine, and Early January 2017 slaughter of Hazara coalmine workers in Baghlan Province. Recently in Herat province, having hundreds of kilometers of border with Iran the majority of the people speaking Farsi, there has been a significant surge of attacks against Shias.

On the other hand, locals in Herat City believe it is an operation being carried out by Saudi Arabia with the help of Pakistan. Recently there have been reports of hundreds of Pashto-speaking men coming from Pakistan to Herat and locals think this can be part of Pakistan’s plan to start the war between the two religious groups. Herat is not the only place where this is happening as Shia gatherings have been under attack all over Afghanistan.

Saudi Arabia has been at war against Iran on several fronts in Yemen, Syria, and Iraq and currently is trying to expand its political, economic and military power. Looking back to the dark days of Afghanistan, we see Saudi Arabia is one of the first countries to recognize the Taliban regime along with the United Arab Emirates and Pakistan, and they have been the major financial source of the terrorist groups.

In the past 15 years Saudi Arabia has been devoting millions of dollars in Afghanistan to promote the Arabic language and to build religious centers to boost the circulation of Wahhabism, the branch of Islam followed in Saudi Arabia. The latest Saudi investment in Afghanistan has included 500 million dollars to build a university for religious scholars in Nangarhar Province, notoriously where ISIS terrorist group has their main base and a radio station.