“You found the real poor of Afghanistan and you came to visit us”. While waiting for the outcome of the EU deal with the Afghan government whether the asylum seekers who have already reached Europe will be sent back or not, the issue of internally displaced people, refugees in Afghanistan, is set to become a true humanitarian emergency.

While they are often referred to as refugees, they don’t fall within the legal definition of a refugee even if they flee their homes for the same reasons. In Afghanistan they are referred to as “mohajir”, which translates into the same term “refugee”.

Unlike refugees, internally displaced people don’t cross a border but seek refuge within their home country. According to UN Refugee Agency UNHCR, “IDPs stay within their own country and remain under the protection of its government, even if that government is the reason for their displacement. As a result, these people are among the most vulnerable in the world”. 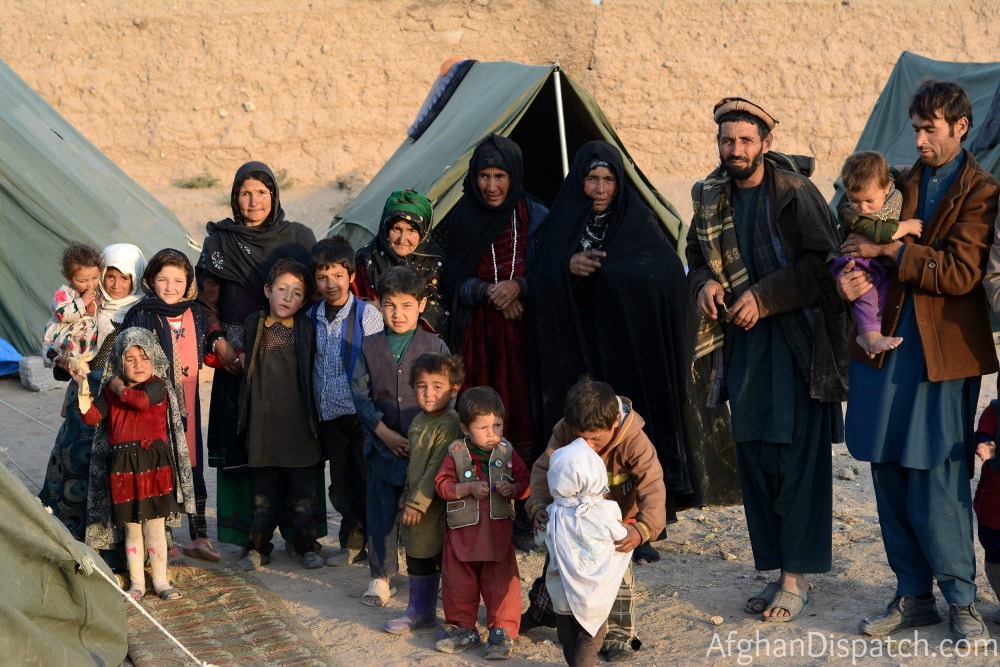 If the national government doesn’t address internal corruption issues and the donations coming from the international community as disposed during the meeting on Afghanistan in Brussels last October 3rd are not properly managed, sending back the failed asylum seekers would make them join the already big population of beggars for a number of reasons: they have sold everything before leaving and they used all the money to pay the smugglers that brought them to Europe.

As Taliban offensive doesn’t seem to stop, with insurgents controlling an increasingly big part of the country and launching several assaults on all the provinces, the number of internal refugees in Afghanistan is increasing by the day. Afghan Dispatch interviewed a group of war displaced refugees from Jawan District of western Badghis Province who fled their homes due to a harsh Taliban offensive and are now living in tents in the outskirts of Herat City. 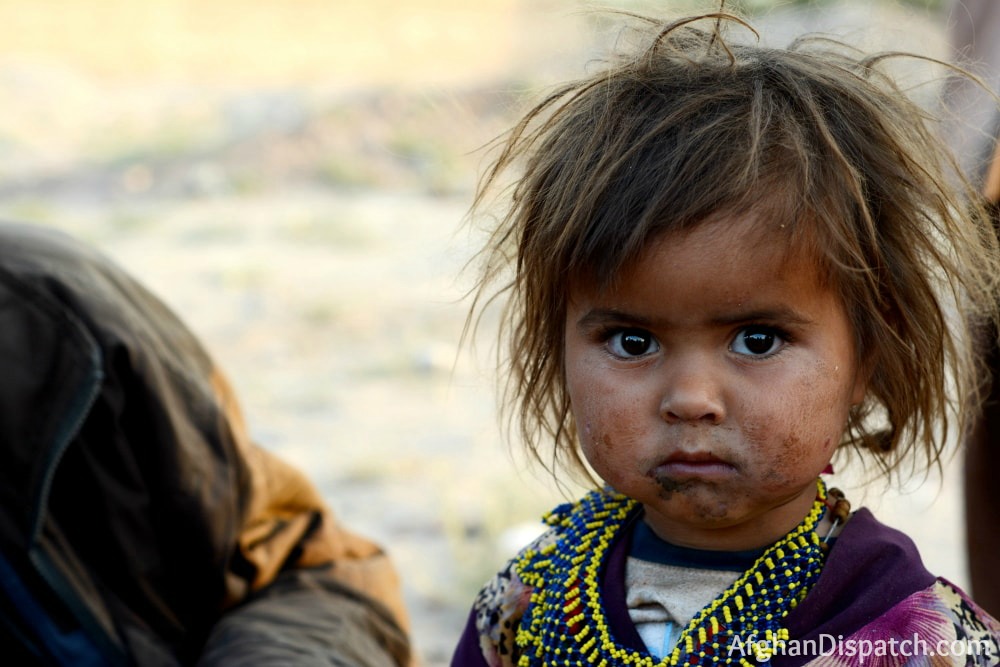 We sat on their worn-out rugs, surrounded by children and adults visibly drained after living in a tent for five weeks, and they started telling us their story.

“We fled from the war, most of the men of our families were killed,” Bibi Gul, a woman who quickly became the group’s spokesperson, told us. “Taliban came to our area,” she continued, “they killed our sons because soldiers. They started a fight against our tribe because our men didn’t want to join them and some were working for the government either in the Army or as police officers. They started charging us taxes for cattle and wealth. Every time they came they took our cattle and food. They came to destroy everything, they even used to come and take small chicken and killed them and took with them to eat. Every night the fight between government forces and Taliban made the sky red.”

Mostly women, this group of war displaced Afghans is still counting their dead. “Sharif was one of the young men of our tribe,” Bibi Gul carried on, “his cattle were taken by the Taliban, he approached them to protest and they skinned him alive. His mother lost her mind and she’s now mentally ill. Right after he died his only daughter was born. Another one of our sons, Qayyoum, has been missing for two months: when Taliban burnt his seven stacks of wheat he went to their area to ask why they did it and he never came back.” 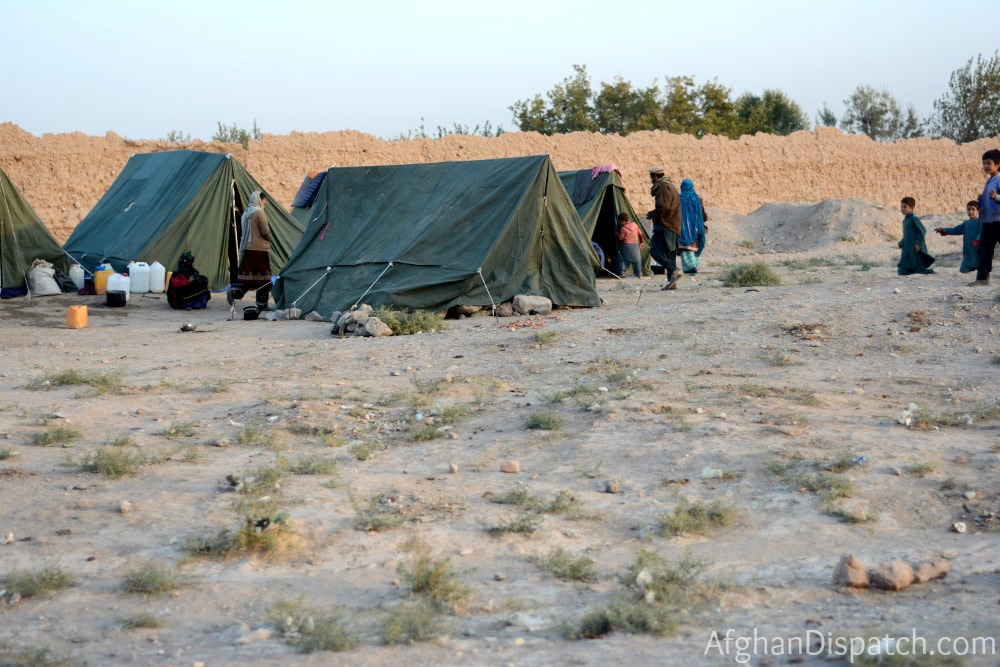 Their life quickly turned into hell on earth and they found no other solution than leave. They left during the night to avoid Taliban terrorists to see them and after two nights and to days they reached the outskirts of Herat City, at present one of the safest provinces in Afghanistan.

“Just how you smuggle people to another country,” Bibi Gul told Afghan Dispatch, “we took our kids and fled from our homes.” A young woman sitting next to her was pregnant and had to walk through the mountains to reach Herat, her husband was killed in the fight two months after she got pregnant. A few days later after they arrived, she gave birth, losing a lot of blood and reporting mental and heart issues due to the harsh life conditions and worries for her child after her husband’s death.

“For days we have lived on a blanket,” they said, “until an elder of the area came and brought us some tents, the government didn’t give us anything.”

Representatives from the local government carried out a survey and counted ten families, “then they left and never came back.” A lot of us are widows and in order to bring food for the kids we go to the houses of local people and wash houses and clothes. “The woman you see right there remained without tent because there were not enough tents.” Tents from some, blankets from someone else, someone who seemed from the govt came with water tanks and plastic gallons and now we go to the river and there’s where we get our drinking water.

The internally displaced refugees in Afghanistan spending the cold months in ramshackle tents are living without the facilities for the most basic needs. 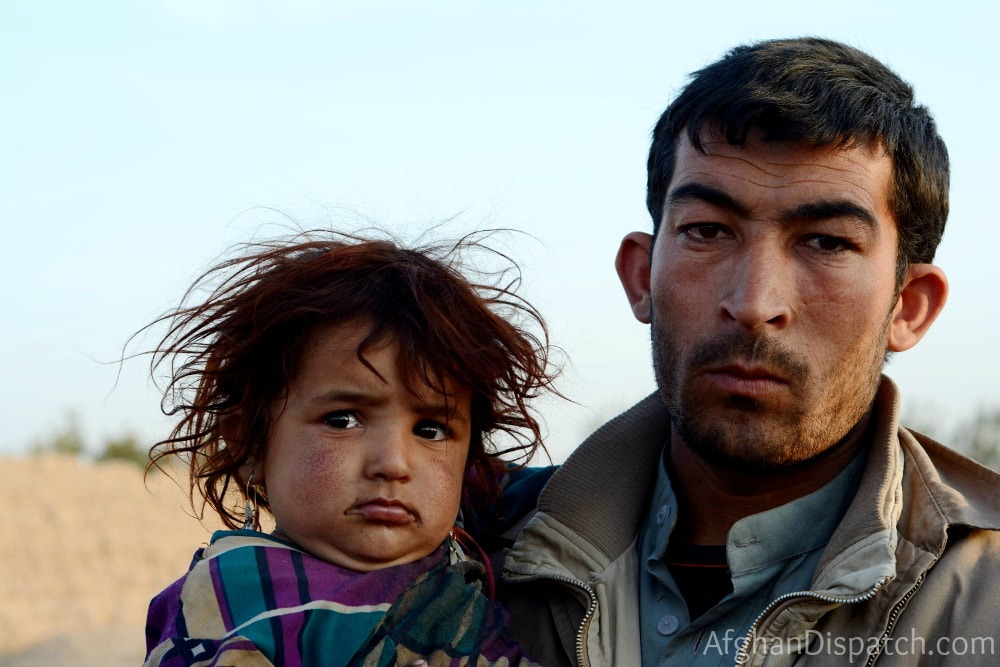 To our question on how their journey was, their answer was quick and simple: “It was the worst journey we have ever made.”

“We didn’t have the money to rent a car,” Bibi Gul carried, “we had to walk through the roughest roads, and when walking we had to keep the kids’ mouth shut to prevent them from crying in case we stumbled on some insurgents’ areas. We couldn’t take with us our boys from 12 years of age up because if they were caught all together it would have been dangerous, so we made two separated groups to cut the risks and the second group started the journey the day after. Even from our own tribe, half joined the Taliban and half the government forces so if they saw young boys were leaving with us they would have stopped them and taken them.”

Both men and women of every age migrated, increasing the number of internally displaced refugees in Afghanistan, the men go to the nearest city to try to find daily labor jobs and bring some food. “In our village we had herds, cows, our own farming and produce and we were living well and with honor,” shyly added Sunia. “Taliban came and took everything away from, they demanded us to pay taxes so they could buy ammunition and petrol for their motorcycles.”

Showed us pieces of stale bread they told us: “This is what we have to keep our stomach full. Sometimes locals bring us some warm cooked food during charity events.”

As recently local media reported the death of 25 war displaced people in northern Jowzjan Province due to cold weather, these families no plans and very little hopes for the immediate future. With temperatures falling below zero at night and most mornings and evenings, the refugees in Afghanistan are bound to be part of a new humanitarian emergency in the war-torn country.