You are here: Home / Archives for Op-eds 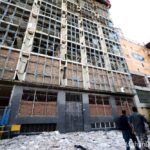 By Sayed Asif Alaie After decades of relative stability, the overthrow of Daoud Khan in 1978 and the subsequent invasion by Soviet forces in 1979 marked the beginning of a lengthy and exhausting period of war in Afghanistan that is now close to its 40th year. As Mujahedeen resistance groups grew in strength, waging guerrilla […]