You are here: Home / Politics / “Butcher of Kabul” removed from UN black list. Who is Gulbuddin Hekmatyar?

It’s recent news that Gulbuddin Hekmatyar, known as the butcher of Kabul and Rocket Yar, rocket lover, has been removed from UN black list.

But who is Gulbudding Hekmatyar? 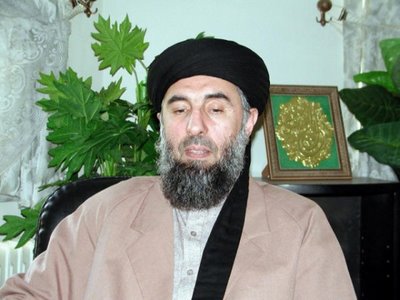 In 1979 he joined the Mujahideen forces to fight against the Soviet invasion of Afghanistan. After the Soviet Union pulled out of Afghanistan the different Mujahideen groups started fighting against each other for power, contributing in making the country plunge into civil war.

Nominated Prime Minister of Afghanistan by (non elected) President Burhanuddin Rabbani from June 26th 1996 to August 11th 1997, Gulbuddin Hekmatyar earned his monikers of “Butcher of Kabul” and “Rocket Yar” for the reported up to 3,000 rockets shot every 24 hours for months into Kabul causing the death of some 70,000 civilians right after Soviet Union pulled out of Afghanistan.

After the Taliban took Kabul, Hekmatyar and Rabbani ran away to Iran where they were given shelter. Later Hekmatyar was expelled from Iran and moved to Pakistan where he had the full support of Pakistani Intelligence Service, ISI.

Leader of Islamic Party Hezb-e Islami, Hekmatyar has a history of crime and ignorance, all his leaders constantly putting on the mask of religion to do their dirty games. His party took responsibility for many attacks that killed civilians since the U.S. invasion in 2001.

As mentioned on the website of Solidarity Party of Afghanistan, in 1988, when a Turkish journalist asked him how they solved the problem of arms and ammunition, Hekmatyar “Rocket Yar” replied: “I consulted by prayers that if we start our arm fight, how the problem of weapons and ammunition of our groups in the mountains will be solved. The same night I dreamed I was with a number of my brothers moving along the Sarsabzi mountain. Although everywhere was filled with fruit trees, I kept seeing the trees of Russian olive trees (sanjed in Persian), so I thought our food problem is solved and we could store the fruits. I also noticed our brothers were all armed and we no longer had the weapon issue and that was when I woke up. After that I was completely sure that the great Allah would have solved all the financial, arms and ammunition problems of our Mujaheddin groups, and this is what happened later”.

Last September 22nd a peace agreement between Hekmatyar’s Hezb-e Islami party and the Afghan government was signed in Kabul. According to the agreement, Hekmatyar will be given 10 million USD annually for his expenses of 500 guards. There are reports that he will be given power in the government, too.

Initially, the peace agreement started in the U.S. Embassy in Kabul through Hekmatyar’s daughters. According to unofficial reports the 500 guards for Hekmatyar were already trained in Pakistan and will be trained in Kabul as well. The Afghan government is due to release all Islamic Party’s prisoners. The UN already pulled Hekmatyar’s name from the blacklist and soon he will be settling in the center of Kabul City with his family.