You are here: Home / Corruption / Afghan ghost soldiers, how and why there are so many

In a country where corruption is endemic and common practice in every layer of the society and market, it comes to little surprise the high number of Afghan ghost soldiers.

Every year Afghanistan earns the place of one of the world’s most corrupt countries, and today is less safe than any other time in the last 15 years. 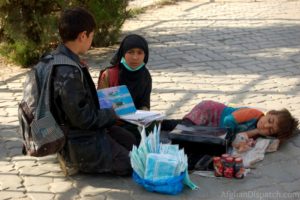 It’s recent news  Special Inspector General for Afghanistan Reconstruction (SIGAR) released a report questioning the money spent on Afghan security and special forces and the high number of so-called “ghost soldiers”. Political experts believe Afghan ghost soldiers, along with a widespread corruption in other sectors of the government, are the main factor behind the fall of almost the entire Helmand Province in the hands of Taliban insurgents.

While Afghanistan’s Ministry of Interior has recently identified only 400 Afghan ghost soldiers, there are tens of thousands of them and it can’t be stopped only by biometrically enrolling the troops because at the moment from 70 to 95 per cent of Afghan Security Forces are enrolled following this technology but the issue of the ghost soldiers de facto still exists.

One of the ways to help reduce the number of the ghost soldiers can be to do proper visits to the units through reliable delegations and to publicly implement the law on the ones where a high number of Afghan ghost soldiers, or any other type of corruption, are registered.

When it comes to Afghan ghost soldiers, the expenses that are being questioned are not only made for the ‘ghost salaries’, but also for relative ‘ghost’ meals, uniforms, fuel for vehicles and even weapons and ammunition. In a nutshell, whatever is needed for every single soldier.

A former subcontractor (third hand) of the Ministry of Interior (MOI) who asked to stay anonymous told The Afghan Dispatch that the people in power within government agencies get the first-hand contracts from both MOI and Department of Defense (DOD), and once they have the contract, they collect their cut and pass on to their subcontractors who did about the same. Being our source a contractor providing for MOI soldiers on the field, he was the third-hand and last contractor.

“How it works is, for example,” he said, “if the first-hand contract was 10 USD for three meals a day for each soldier, once it arrives to the third hand, it was 5 USD, not profitable enough for the third-hand contractor to fulfill everything mentioned in the original contract.”

“This is why,” he continued, “I could only manage to provide less quantity and lower quality of what was requested on the first contract to the soldiers on the field.” In dangerous areas, where it is hard to send the supplies, the money that actually arrives in the hands of the final subcontractor is not enough and he wouldn’t make any profit out of this contract. “So to make up to this loss I go to the commander of the army forces or police station who tells me to provide for 150 soldiers. However, I still send my report as if I need to provide meals for 300 soldiers.” 150 Afghan ghost soldiers are created and the cut out of it is split between the last subcontractor and the station commander. “This is how I, as the third-hand subcontractor, make a living.”

As for the commander, he still has all 300 soldiers on his payroll who physically go to the bank to collect the money of the salary at the end of the month, even though they never existed but were mainly relatives or locals registered specifically for this purpose. Since everything is good on the book he is always safe and can keep for himself the pay and everything else provided for the extra 150 soldiers he has on payroll.

While the issue of Afghan ghost soldiers has been recently raised by SIGAR watchdog, corruption is a widespread concern all over the country and in different sectors of the society, such as ‘ghost schools’, ‘ghost teachers’ and ‘ghost students’.

Corruption is also a component of daily life in Afghanistan. A new poll done by Integrity Watch Afghanistan shows that the annual rate of bribe Afghans give to the government bodies and agencies is up to three billion dollars, increasing of over a billion dollars compared to 2014.