You are here: Home / Women in Afghanistan / 10 year old Afghan girl found on basement after months of abuse 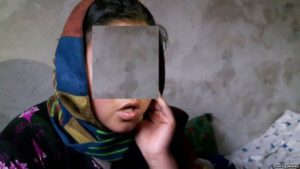 Robabeh, a ten year old Afghan girl tells local Radio Azadi her story of how she was held in captivity on a basement and abused by her 80 year old husband in the center of the Afghan capital, Kabul.

In the past year Afghanistan’s human rights watch reported a variety of abuses, but the story of this ten-year-old bride who became the victim of an eighty year old man’s lust has sparked outrage all over the country.

Robabeh, a ten-year-old Afghan girl belonged to a poor family, her father, the main breadwinner of the house, an old ill man. He told Radio Azadi the 80 year old man kidnapped his daughter and made her his bride. For six months, Robabeh was kept in a basement and abused by the old man and used as slave by the new family.

Her native family lives in a rented house within walking distance from the house of the old man who allegedly married Robabeh without her father’s consent. He told the media: “My daughter is no longer virgin, took her to doctor and said she is not virgin, but no child is inside her because she is a child herself.”

According to Robabeh’s father, the man who kidnapped his daughter was the chairman of the local council in Dasht-e Barchi area and told him that due to his contacts inside the Department of Defense he was untouchable. “He is powerful and knows influential people,” Robabeh’s father told the media. “He told me that if I complained to the government he would shoot both me and my daughter.”

The Afghan girl spent six months in the basement of the man’s house and his first wife forced her to sell herself to other men they would bring to the house. “They kept telling me I needed to bring food for dinner,” Robabeh said. “I had to stay in the same room with him and if I didn’t, they all beat me. The first wife told me I needed to make 1000 Afghan rupees each night to feed the family.”

Robabeh’s father claimed the old man told him his daughter had ran away with a young man (the husband’s cousin) to Pakistan and that he would pay 180000 Afs (3000 USD) to forget about her for the sake of her other 7 year old daughter.

“I had no one to help me find her and I thought maybe my daughter is dead,” he said. “I’m sick and on one-day labor, Robabeh’s mother died years ago and I married a woman who is mute and has mental problems.”

Robabeh managed to escape from the husband’s house after months of abuse and now is asking President Ghani for a just punishment against her abuser.

“They never let me out,” Robabeh told Radio Azadi. “They always kept me locked in the basement of the house. Please help me. I want someone to bring him and kill him in front of me.”

Now her father is afraid of retaliation from the old man who married his daughter by force claiming that he’s spending entire days in front of their house warning them that he will kill Robabeh.

Radio Azadi went to the husband’s house but wasn’t able to talk to him.